The most recent rpg that I have played is Fate Accelerated Edition.  This was actually my first play of this ruleset.  I was a backer of the FATE Kickstarter and I have been trying to get these rules to the table for a long time.  I ran a treasure hunting scenario inspired by Indiana Jones and the Gold Digger comic series.  I was very impressed with how well my players took to FATE.  I always considered myself to be the storygamer of the group but I think that they actually grokked the system better that I did.  I look forward to running more FATE, although I think that I will move on to the FATE core rules for the next game. 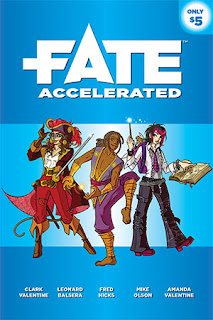 If you haven’t tried FATE or Fate Accelerated Edition, you really should.  The rules can be downloaded for free or for pay-what-you-want pricing, and there is a great FATE SRD available online.