Book Reviews for Gamers: Heart of a Dog by Mikhail Bulgakov

It is time for another book review.  Today's book may seem like an odd choice, so I would like to talk about why I write these "Book Review for Gamers" posts.  Role playing is a creative process and those who partake in it need fodder for their imagination.  There is a reason why Gary Gygax included Appendix N in the AD&D Dungeon Masters Guide.  Of course, many of Gygax's listings are from the fantasy genre.

Inspiration often comes from unusual sources that one might not expect.  George Lucas was inspired by the Kurosawa film The Hidden Fortress when he made the original Star Wars.  Allan Calhamer was inspired by the card game Hearts when he was designing Diplomacy.  When Christopher K. Bigelow wrote issue #1 of his zine The Oracle he included a dungeon adventure that was based on the film Escape from New York.  I believe that it is important to go outside one's comfort zone and read books, comics, plays, etc. from all genres.

Back to today's review.  I read the book Heart of a Dog by Mikhail Bulgakov.  I bought this book as a teenager because I was intrigued by the premise.  Heart of a Dog was written in the Soviet Union in 1925.   In the book a physician transplants human organs into a dog, which results in the dog turning into a human.  The premise sounds science fiction but the actual book is filled with political and social commentary.  The book is a quick read at 123 pages.  Anyone interested in post-revolutionary Russia would enjoy the story's satire and prose.

How can this book inspire your gaming?  If you are interested in running a historical game then this book will give you a nice peek at Soviet life in the 1920's.  Literature is a great way to learn about a specific time and place.  Also, the concept of turning animals into people is great fodder for horror/steampunk games.  This territory has already been explored in The Island of Doctor Moreau by H.G. Wells, while Heart of a Dog gives this idea a Soviet spin.  The doctor in Heart of a Dog practices in his clinic in Moscow rather than a secluded island.  Also, the doctor in the book would make for a great NPC.  He is a man of privilege watching as the new generation assaults his lifestyle.  Part of the story is seeing if his connections and important standing can protect him from the consequences of his actions.  I have created a FATE Accelerated version of him below:

Aspect:  Of course I know the committee director, shall I telephone him now?

Stunt:  Forceful personality - +2 when forcefully attacking during a social conflict.

Check out Heart of a Dog.  It is a a quick, unusual read and full of good ideas for your gaming table.

I have been playing through the Training Module for Star Fleet Battles.  It is a great free product that is designed to teach new players the basics of the game in incremental steps.  The first 5 scenarios are solo training missions that allow the player to master movement, different weapons systems, and energy allocation.  I recently played through scenario #5, which involves a Federation ship having to rescue the crew of a shuttle-craft while Klingon warships attack you.  The game has "robot rules" to govern the actions of the Klingon ships while you fly in to rescue the shuttle crew.

Scenario #5 is a turning point for me in a few ways.  The first is that the next scenario is a two player duel.  Scenarios 1-5 give you all of the basics of the game, and scenario 6 implores you to use these skills against a human opponent.  It is time to step out of the box of solo play and convince a compatriot try out the game.  This means teaching an opponent skills that I learned gradually through 5 lessons.

It is also a turning point in that the print-and-play components of the game are starting to affect the play of the game.  Each scenario adds more counters, and counters sometimes have to stack on top of each other.  This is usually not a problem with cardboard counters, but my cereal box counters are thin and have little weight.  They become easily jostled and sometimes can flip many hexes over from their position during play.

Another turning point is that I feel that I have been introduced to the meat of the Star Fleet Battles rules system.  The game involves ship movement, direct and seeking weapons systems, and energy allocation.  I have browsed through the rest of the rules to see what is coming up.  There are alien races with new weapons, a few new bits to add such as sensors, but I feel that the basic engine of the game has been laid bare.  Every new rule will just build off of this system.  From now on ships will have bigger shields, more weapons, more systems, turns will be longer, but overall I know how the game will run.

The question before me now is, "Is Star Fleet Battles a game that I want to pursue?"  There are still 6 more scenarios that I can try out in the Cadet's Handbook, but is this a game that I want to invest my time and money in?  On the one hand, the game does have a lot of complexity.  On the other hand, now that I have a taste for how the game plays I am curious to see how that complexity works.  The main lesson that I have learned is that if a game offers a free intro version it is definitely worth the time to try it out.

I'm Geek of the Week

I've been chosen as Geek of the Week over at rpgggeek.com.  Feel free to head on over and ask me some questions.


Meanwhile, summer is approaching and I am making a list of games to play.  I need to try out some naval miniatures battles using General Quarters III, finish learning Star Fleet Battles via the free Cadet Module, and work on a FATE superhero campaign.
Posted by Ned at 1:34 PM

Games I am Excited About: Shadowrun Anarchy

I saw a post on my Twitter and Google+ feed from Catalyst Game Labs.  It mentions a product called Shadowrun Anarchy.  The post does not have a lot of details but it did have this text:


Shadowrun: Anarchy is a new way to get into the best cyberpunk/urban fantasy action around. Based upon a rules-light and easy-to-learn mindset, Shadowrun: Anarchy is a narrative-focused game experience that allows even an uninitiated gamer to grab some gear, load up on spells, and quickly get to throwing the dice. Immerse yourselves in the Sixth World!

I love the Shadowrun universe.  I remember being a scruffy teenager and seeing the first edition Shadowrun book on the Waldenbook shelf and I knew I had to own it.  I had read everything William Gibson had ever written and now here was a game that mashed that up with D&D?  I have played the computer game Shadowrun Returns but I have never actually played the tabletop game.

One critique that I have heard over and over on the internet is that the Shadowrun rules are too complex and/or of sub-par quality.  Having never played it I cannot comment on this too much.  I have read through the 5th edition quickstart and the basic mechanics seem sound.  I do believe that the more options you add to your game can make it more complex, but I think the same is true for Pathfinder.  It seems that Catalyst Game Labs has listened to some of this criticism and is creating a product to address it.  I do love rule-light narrative games.  My hope is that this is a streamlined version of the rules that allows for fast and fun play, while still using the base mechanics.  This way players can convert material easily between games and can use Anarchy as a springboard for Shadowrun.  Maybe Anarchy will be the BX version and Shadowrun will be AD&D?  We shall see.

A to Z Challenge Reflection #atozchallenge

The April A to Z Challenge has ended and I had a post for every day.  I enjoyed the challenge and had fun checking out other blogs.  I have thought about the blog and my posting in general, and I have come to some conclusions. 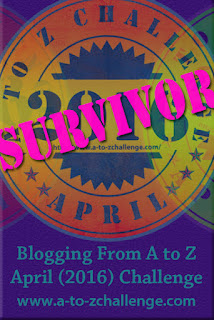 I like sharing with people.  The main reason that I started this blog was to share cool stuff that I have found, read, played. or seen.  Sometimes I feel that it is not worth talking about a certain game or book, because either everyone already knows about it or they can easily find it themselves.  However, life does not work that way.  I have found so many interesting things in the tiny corners of the internet.  If I introduce one person to something new, then I have done my job.

I want to be more of a creator.  I don't know if I will be writing my own game soon, but I like writing about my hobbies.  Writing about my gaming, reading, comics, and other fancies helps me to gauge how much time and interest I put into them.  It is very easy for me to collect games and books.  By writing about them I make sure that I am appreciating the things that I collect.  I look at them, read them, play them, and think critically about them.

I would like to update the graphic design of the blog.  This is not my forte, so I will be looking for advice from someone else.  I have looked at many visually appealing blogs this month.  It is time I do some updating to my own site.

That's it for today.  Big high-five to everyone who did the A to Z challenge.  I had fun and enjoyed reading the posts!