Gaming Wisdom: Use What You Have

I admit that I am a games collector.  My shelves are full of great games that more than often sit unplayed.  I consistently challenge myself to use to stuff that I have.  The other day I received a karmic lesson.

I have written on the trials and tribulations of our move.  All of our stuff spent about a month and a half in a Houston warehouse during the hottest months of the summer.  A few days ago I pulled out my Sigmar figures and paints and decided to put a coat of Imperial Primer on one of the figures.  This was the result. 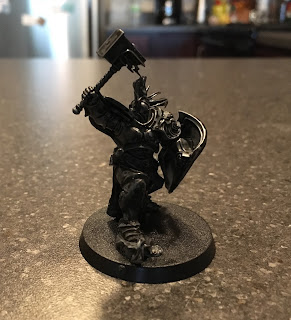 The miniature is supposed to be coated in black.  The paint I was using was not doing a good job of covering the figure.  The covering is patchy.  When I looked in the pot I saw that most of the paint had dried into a huge lump on the side of the pot.  The lesson learned is that I should have used my paint right away.  The paint would have been still usable.

I went to my local game store to buy a pot of Imperial Primer.  The store was out.  The Games Workshop site currently does not list Imperial Primer as a product, and Games Workshop is notorious for changing their product line.  Maybe the store will be able to order another pot or maybe I will need to buy a different brush-on primer (I can't use spray primers).

This is a good learning experience.  Use what you have.  Don't worry about saving things for tomorrow.  Enjoy what you have today! 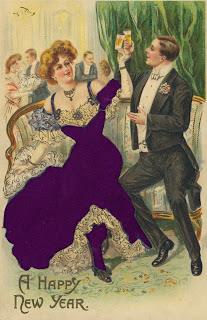 As we enter a new year I would like to take a look at my gaming habits in 2017 and reflect on the state of the blog.

One of my struggles as a game collector is finding a multitude of great games but then not actually playing them.  For years I have been interested in the game lines from Starfleet Games, such as Star Fleet Battles and Federation Commander.  Both of those games have free print-and-play demos and I have tried both of them solo.  This year I convinced a friend to try out the Federation Commander demo.  We ran a basic Federation vs. Klingon scenario.  I now own a copy of Star Fleet Battles so my goal for this year is to find an opponent for that game.

Returning to Magic the Gathering was another gaming highlight.  I have always been curious about Magic and I found someone to teach me the game about six years ago.  At that time I had steady opponents.  I played for a few years but them my Magic playing trickled to a drip, and Magic is a game that requires practice in order to be proficient.  In 2017 I started playing more and I even participated in a sealed league, which is a format that was new to me.

I continued to experiment with play-by-mail in 2017.  I dropped Duel2, the gladiator combat game run by Reality Simulations.  I enjoy the game, highly recommend it, and will probably return to it again.  I just needed to spend my time and financial resources elsewhere.  I am still playing Hyborian War, a grand strategy wargame in the Conan universe.  Once this current game ends I will sign up for another one.  I have started a science fiction game called Starweb run by Flying Buffalo.   Starweb is an exploration/trading/combat game.  I plan on writing reviews for both Hyborian War and Starweb this year.

I was reviewing my rpg plays over at rpggeek.com and I was pleasantly surprised to see that I started 2017 by running a Pathfinder session.  I have wanted to return to Pathfinder as the first time I ran it I didn't feel that I knew enough at the time to make it work as smoothly as it should.  That session ended in a TPK!  I continued to be a player in a D&D 5ed campaign in 2017.  I enjoy playing and I think that every gamemaster needs to play a lot in order to understand gaming better.  However I am definitely getting the urge to run a campaign and I ended the year running a Black Crusade scenario.

We moved!  Moving has put some chaos into my life.  We moved into an apartment and my gaming space shrunk.  I have two FLGS in the area, both that have game nights.  I have not been to either game night yet.  I also applied for a job in the tabletop game industry.  I did not get the position, but I did make it to the second round of applicants.  Not bad for someone with no profession game industry experience.

I did not write as many entries in 2017 that I would have liked to.  I had 35 posts, which is the 2nd lowest total for a year.  I was hoping to keep up Rolling Wednesday throughout the year.  I thought that posting a picture of dice wouldn't be too hard.  Well, moving really messes up our life and my Rolling Wednesday experiment did not post every Wednesday.  I also failed to make any big changes to the visual look or design of the blog.

We are in 2018 and like the title says, I have no resolutions.  My goals are what they always have been, try to play and create more.  I will continue posting to the blog.  I will continue writing reviews.  I am consciously trying to limit my acquisition of game products and enjoy what I already own.  In fact, I have a bunch of unpainted miniatures that I hope to paint soon.  When I do I will post pictures!  Game on!
Posted by Ned at 9:57 AM