I found this gem at a used book store.  The Armory's 30 Sided Dice Gaming Tables is an interesting artifact from the early days of fantasy role-playing.  The copyright date is 1982.  The cover advertises this book as a supplement that is suitable to be used with "Dungeons & Dragons, Advanced Dungeons & Dragons, Runequest, Chivalry & Sorcery, Tunnels & Trolls, and other fantasy role-playing systems."  That is a nice selection of old school rpgs, and it is interesting to note that all of these systems are still available.  Another clue to the product's age is that the words "patent pending" appear next to the image of the 30 sided die on the cover. 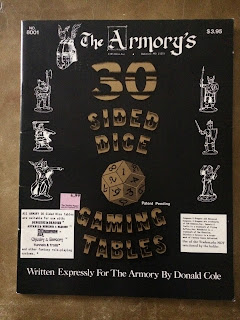 The book is 40 pages and stable bound.  The inside front cover has an about the author section and an awesome drawing of a dragon on top of a hoard of treasure.  Page one is an introduction where the author shills the idea of using a d30 in your game.  There are also two ads for the company's dice. We then get a table of contents on page two and and instructions for reading a 30 sided die on page three. At this point I should explain that the die pictured in the book is numbered differently than other 30 sided dice that I have seen.  The d30 in the book has 30 faces.  10 of those faces are labeled -0 to -9, ten faces are labeled 0 to 9, and ten faces are labeled +0 to +9.  Negative numbers are the integers 1-10, regular numbers are 11-20, and positive integers are 21-30.  The author gives a handy chart summarizing this information.  My research found that a revised version of this book was released soon after that feature the tradition d30  which was numbered 1-30.  I found this old d30 an interesting historical oddity.  It reminded me of older d20s that had 0-9 engraved twice on their faces, where one set of numbers would be inked in a different color and would represent 11-20.  There are also instructions on how to use the d30 to create a number from 1 to 300.  This part tied my brain in knots upon the first reading but eventually I figured it out.

The rest of the book is made up of charts.  The first is a critical hit table that covers body locations. The next few tables cover lists of gems, jewelry, and their worth.  Then we get height and weight tables for humans, elves, dwarves, gnomes, and hobbits (yes, the term hobbit is used).  These charts are meant for male characters, and the author includes conversions for rolling for female characters by subtracting a certain amount of pounds or inches.  Apparently female adventurers where dainty back in the 80s.

On page 23 we get the one and only table used for rolling a number between 1-300.  Oddly this table only has 150 entries.  The table is a language table and includes entries as esoteric as horse, pseudo-dragon, and yeti.  The author points out that the table can be used as an encounter table or a reincarnation table, as he has used it in his campaign.  My favorite table is next, which is mundane experience.  I will be using this table in my next game so that characters can roll up backgrounds such as tanner and gemologist.  There is a weapons table, slaves table, tables for animal skins and their value, a table listing 30 ancient civilizations, ancient ships, diseases, poisons and their severity, animal trainer tables, spell effects, and magic items.  The book ends with a bibliography, index, and price listing for the Armory's various products.  The back cover has an ad and price list for 30 sided dice (available plain or inked) and an ad for pens to ink your dice.

The book is filled with artwork by Greg Barrett.  The majority of the illustrations are of fantasy miniatures that include the company and product code of the mini (such as Ral Partha #02-102 Sea Elves).  The rest of the pictures are of dice, treasure chests, and other stuff.  The pictures of the miniatures are a cool touch.  They seem to call out and say, "Use me in your game." 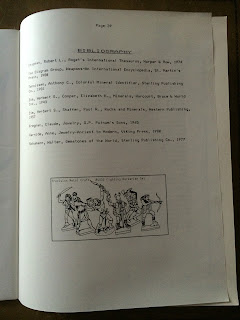 Bibliography along with a picture of barbarian miniatures

30 Sided Dice Gaming Tables is an interesting piece of rpg history.  It was obviously written to help the Armory sell their d30s.  If you owned the AD&D Dungeon Masters Guide then you already had more random tables than you could handle.  The author tries to sell you on the idea that increasing your choices is a good thing for your campaign, i.e. 30 options is better than 20.  The charts are conveniently laid out at one per page and this book would be easy to use at the gaming table.  In my opinion the book's main value is that is is an example of the hobbyist nature of early rpg culture.  The pictures of miniatures and ads for dice-inking pens look back to the days when playing D&D meant assembling a hodgepodge of materials from various sources.  The author's tone throughout the book says, "I made my own d30 tables, and so can you."

I am glad to have this book in my collection for the nostalgia factor.  There are a few tables that I would use in a game.  I wouldn't go searching this book out unless you are the curator of the 30 sided dice museum, but if you see a copy it might be fun to grab to open the window onto the fantasy rpg scene of yesteryear.

Tales from the Game Tavern is a zine put out by P.E. Pace, aka the Grand DM,  Issue one is 28 pages and features an orange and black cover with some nice silhouette artwork featuring two fantasy adventurers going trick-or-treating.  The issue features system neutral articles for OSR style fantasy rpgs.  Disclaimer, the Grand DM sent me a free copy as part of a give-away on his blog.  Many thanks, Grand DM! 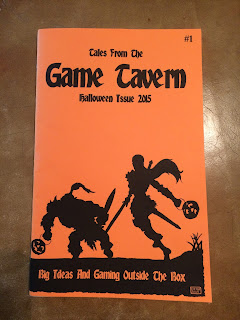 Tales from the Game Tavern includes seven articles and a copy of the Open Gaming License.  The first article is a variation on the flesh golem.  The second article, my personal favorite, covers cursed armor.  There is a nice selection of pieces that provide protection but also carry some troublesome malediction that will keep your players busy.  They are perfect for the munchkin in your party.

The third article is a table for providing haunting encounters for taverns.  The fourth article is an adventure.  I was surprised to see that this adventure included an outdoor hex map as well as a mini-dungeon map.  The adventure has depth beyond being a hack-and-slash crawl (although it could be run as one if you wish) and it has the right dose of whimsy.

The fifth article contains tables for alien abductions.  The author wrote the tables for a fantasy setting but the results would fit in perfectly for Call of Cthulhu or any other horror game scenario.  The next article discusses a scenario for running a zombie outbreak in a fantasy setting.  The final article contains a recipe for "Game Tavern Goulash",  The OGL closes out the zine.

This zine is an enjoyable read.  The Halloween theme is present throughout the issue.  I see myself using something from every article in my game.  The art is a mix of public domain images and drawn pictures that look medieval and spooky.  Tales from the Game Tavern is fun to read and ready to use at the game table.  I would recommend this as the perfect treat to pass out to the adventuring parties that knock on your door.

You can order your own copy at ultanya.com.