My favorite house rule has been to give out bonus xp for players who bring snacks and who bring their own miniature that resembles their character.  The snacks helped out because I had one less thing that I needed to plan for game day. The minis helped out because my players stopped using random Mageknight figures as proxies.  It was confusing when the halfing had a zombie centaur as his figure on the battlemat.

My favorite revolutionary game mechanic is the concept of keys from The Shadow of Yesterday.  Basically, keys are ways that your character can earn xp for doing things that make sense to your character.  They are guides for how your character should behave and reward your character for behaving that way.  For example, a pacifist gains xp for not fighting.  Another cool aspect is that a charter can buy off their key.  Once per game they can get the max xp bonus for shunning or renouncing their key, i.e. The pacifist decides to finally pummel some guy in the face, gets 10 xp, and gains a major character change. 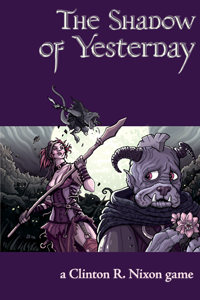 Day 26: Favorite Inspiration for your Game

I was reading the designer’s website for a game called 3:16 Carnage to the Stars which is basically “Space Marine the RPG”.  On the site someone talked about a session in which they played as Imperial Stormtroopers.  I took that inspiration and created a scenario where the pcs were stormtroopers who were scouting Endor for locations to build the shield generator for the second Death Star.  My favorite part of 3:16 Carnage to the Stars is that when you roll damage the number on the dice is not how much damage you do, but how many aliens you kill.  The players had a good time mowing down Ewoks.