My favorite rpg illustration is the cover of GURPS horror (1st and 2nd edition) by Michael Whelan.  The picture shows a skeleton, dressed in a duster and hat, peering out from behind a door while brandishing a knife. 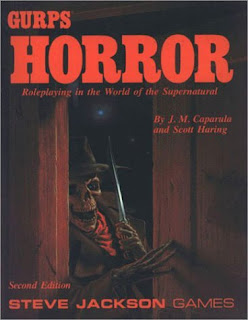 I remember seeing this picture in the Steve Jackson Games catalog as a kid and thinking, "What is that thing?  He is creepy.  I want to play in the universe where he exists."  I saved up my allowance and ordered a ton of gurps books based on that picture.

I listen to three rpg podcasts regularly: Role Playing Public Radio, Fear the Boot, and System Mastery.  I enjoy them all for different reasons.  If I had to pick a favorite it would be Role Playing Public Radio.  One of the things that i enjoy is how they talk about interests in their life and how they relate to their gaming.  For example, Ross Payton often talks about his interest in architecture and how how he tries to emulate architectural horror in his games.  I also enjoy how they end each podcast by talking about books, movies, video games, and other things that they enjoy.  I always think that our rpg playing can be made better by enriching it with outside influences, plus I have found some great books and movies from their recommendations.

My current favorite rpg accessory is Google Hangouts.  It has allowed me to play games I have always wanted to try and to game with people around the world.  I still prefer to game face to face, but Google Hangouts has opened up a window in my game playing opportunities.

I started GMing a Hackmaster Basic campaign in a homebrewed world.  The setting was 15th century Earth but with high magic.  We ran the game in Hackmaster for about 3 levels and then converted the rules over to Pathfinder.  I GMed that campaign for three years.  I have currently passed the reigns on to one of the players.

I’m not sure which session was the longest, but I know which one felt the longest.  I was a player in a Hackmaster game.  We were tracking a group of slavers.  We weren’t sure where they were going to strike next but we did have a general idea.   Our party headed to a farm to warn the family there that slavers might be coming.  We spent the session sitting on their barn roof waiting for the slavers, who of course never came.  So we had a session with no combat, the only role play was between our party and a family of walnut farmers, and we sat on a roof. We did buy a few barrels of walnuts from the farmers.