The Kickstarter game that I am most pleased to have backed is Call of Catthulhu. I was an early bird backer for this one. I tried this game with my daughter and she loved it so much I had to order a print copy of the rules just for her. This is the only game that I have been able to run for my whole family. In fact, why don't I just write a review of the game.

Review of Call of Catthulhu 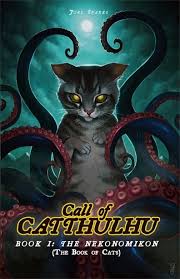 Call of Cattulhu is a role playing game where you play cats fighting against supernatural threats.  The new edition of the game is made up of two books; the Nekonomikon and the Cat Herders Guide.  This review will cover book 1: the Nekonomikon.  The Nekonomikon is all that is required to play.

The Nekonomikon is available as a 40 page pdf or print-on-demand softcover book through Drivethroughrpg.com.  The Nekonomikon is the player’s guide and core rulebook.  The layout is easy to read.  The artwork consists of different cats with weird Lovecraftian appendages attached to them.  One thing that I really like about the book is that there is a great section of rules summary sheets in the back.

The premise of the game is that cats are intelligent beings who have carefully groomed humans to care for them as the cats fight against the forces of Lovecraftian darkness.  The system is very light.  Characters create a cat and decide on a background and class.  Most of your character sheet is descriptors.  In fact, there are no numbers listed at all on the character sheet

Whenever a cat tries to do something difficult, they roll a number of six sided dice.  A 1 or 2 is bad and 3,4,5, and 6 is good or a success.  This is also true for when the bad guys roll, so the odds are always in the favor of the players.  Characters can receive a bonus if their cat is particularly suited for the task that they are attempting. The book tells the players to use cat dice, which are custom dice with two cat faces that are crossed out and four cat faces that are not crossed out.  A batch of these dice were manufactured during the Kickstarter and are currently not available, but regular six sided dice will work just as well.  Players get treats, which are used for re-rolls.  Everything done in the game plays off of this success mechanic.  Combat is a contest as to who rolls more successes,  There are special moves that you can do in combat, critical successes and failures, and a few other exceptions but otherwise the core game mechanic is simple, nice, and great for keeping the story moving.

I liked that a 3-6 is always good and a 1-2 is always bad, even when the GM roles.  This is great for playing with kids, as the odds are more likely that things will go well for the players. My daughter wants to play this game often, and the easy mechanics are perfect for family gaming. She can easily add her own rules for magic and flying cats to the system with minimal effort.

Another aspect of the mechanics is that players are expected to method act as cats.  Treats are used for re-rolls, and one way to get treats in game is to get petted by humans.  If a cat is carrying something they are not allowed to talk, and cats who are not near each other can only communicate in meows and noises.  I run my game in a more cartoonish fashion, however. Our cat characters talk to each other all the time, and the game runs just fine.

What I liked most about this system

The core book is short and simple.   There is a great set of reference charts in the back.  The rules are easy to explain and to implement in play.  A group can create characters and begin playing in ten minutes.  The game is full of cat flavor.  If you have gamers or potential gamers who love cats, this is a great choice for them.

What to watch out for

This is a narrative, loosey goosey game.  There are virtually no stats, no list of monsters, no list of skill challenges, etc.  Players and GMs should be ready to play this game with a healthy dose of imagination.  If you need a solid system with a lot of rules to sink your gaming hooks into, this doesn’t have it.

Of all the games that I have backed on Kickstarter, this one has gotten the most play time at my table. I love the game and look forward to running many cat adventures. I give it two paws up.