U is for Usagi Yojimbo #atozchallenge

Today's post is about Usagi Yojimbo.  One of my other hobbies besides gaming is reading and collecting comic books, and one of my favorite comic characters is Usagi Yojimbo.  I saw my first Usagi Yojimbo comic on the rack at the hole-in-the-wall comic store where I shopped as a kid in Hackettstown, New Jersey.  I did not recognize the character, a samurai rabbit, but I did recognize the other character on the cover who happened to be Leonardo from the Teenage Mutant Ninja Turtles.  I bought the issue and went back to pick up another issue of Usagi Yojimbo. 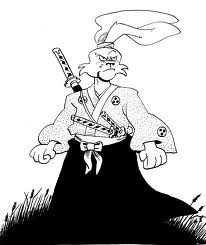 If you describe the Usagi Yojimbo series it sounds silly.  It takes place during the Edo period in Japan.  All of the characters are anthropomorphic animals.  Usagi Yojimbo is a samurai whose lord was killed in battle and now roams the countryside.  The comic works and it works well.  The art draws you in and is full of peaceful peasant scenes and thrilling battles.  Characters die.  Every story is well told and engaging.  Reading an issue always gives me the justification that I always knew cartoon animal stories were awesome.  It is kind of like that feeling when you first see the cartoon of Porky Pig cussing. 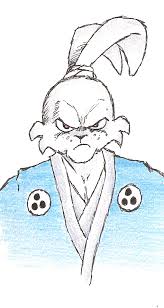 There are actually two Usagi Yojimbo role playing games.  The one that I own, Usagi Yojimbo Role Playing Game, was published by Gold Rush games and uses the Fuzion system.  They also published a book of monsters and supernatural creatures called Usagi Yojimbo Monsters!  I am not a fan of the system but I do like the game.  There is setting material on feudal Japan as well as a chronology of the Usagi Yojimbo comic storyline.  The appendix also includes rules for converting the game stats to the Fudge system.  Unfortunately it is out of print.

Sanguine Games, publishers of the furry rpg Ironclaw, currently sell their own Usagi Yojimbo Role-Playing Game.  I haven't played this one but I know that it uses the same game engine that powers their Ironclaw game.  This game is definitely on my wishlist.

If you are a fan of comics, samurai, or good story telling then grab an issue of Usagi Yojimbo.