Today's post is about Licensed games, particularly rpgs.  Licensed games make sense, as there are lots of media properties that are popular with geek culture and are ripe for role-playing opportunities.  When I was a kid I played out adventures with my Star Wars action figures, so it makes sense that I would want to play out Star Wars adventures now with a role-playing game.  Some licenses are a natural fit to role-playing games.  Star Wars, Star Trek, and Lord of the Rings have had multiple games based on them.  However, role-playing culture has produced quite a few esoteric licensed games that have made me wonder, "Who thought of making that game?"  Today I am going to list the five most unique licensed games that I have in my collection (in no particular order).

Unwritten - How about an rpg based on the computer game Myst?  That's what this game is.  I got the PDF, which is available on a pay-what-you-want basis from rpgnow.com.  It uses the FATE mechanics and is based on the universe from the Myst computer games.  This game intrigues me because it is about exploration.  I played the original Myst and Myst Online: Uru Live.  I love the puzzle aspect of the games and the crazy cities and worlds that you travel through.  The rpg is a labor of love that I hope to run one day. 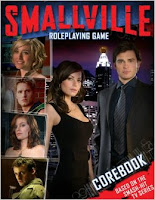 Smallville Roleplaying Game - Superhero games have always been popular, and there have been a few games based on the DC comics universe.  When Margaret Weis Productions announced that they were losing the license to Smallville and were selling this game at a reduced price I picked up a copy.  I did watch Smallville for two seasons.  Then I decided I couldn't take watched Clark Kent not be Superman any more.  The show had good actors but I ultimately felt that the story wasn't going anywhere.  The rpg uses the Cortex system, and this version makes use of character's relationships to each other.  There are stats for many DC characters who appeared on the show, such as Green Arrow and Aquaman.  I would use this game to run a Legion of Superheroes game full of soap opera levels of drama. 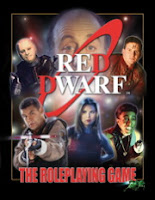 Red Dwarf: The Roleplaying Game - The British sci-fi comedy Red Dwarf always seemed like a niche show to me.  It was full of hokey jokes and cheap-looking special effects.  Imagine if Doctor Who and Benny Hill had a baby.  I saw a copy of this game on sale for $1 and I grabbed a copy.  Will I ever run it?  Who knows, but it is a great conversation piece. 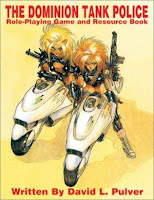 Dominion Tank Police - When I think of influential anime, I think of Robotech, Akira, or Ghost in the Shell.  Dominion Tank Police is an anime that I had heard of but had never seen.  I did not realize that it had enough of a following to justify an rpg.  This game was published by Guardians of Order and uses their Tri-Stat system.  My friend found this in a Half-Priced books and grabbed it for me. 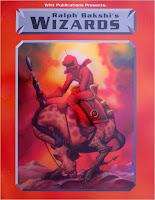 Wizards - Ralph Bakshi is an interesting figure in animation.  His animated Hobbit movie is a classic and was instrumental in forming my love of fantasy and role-playing.  In 1977 he made an unusual post-apocalyptic film called Wizards.  It is like a Salvador Dali painting.  The film is wonderful to look at but it doesn't make a lot of sense.  I love the movie Wizards and when I found out there was an rpg based on it I had to buy it.  Now I own two copies and both sourcebooks.  By the way, I consider the movie Wizards mandatory viewing for anyone who wants to run a Gamma World campaign.

So what are some interesting licensed games that you own or have played?
Posted by Ned at 6:00 AM