C is for Call of Cthulhu - #atozchallenge

Today's post is about Call of Cthulhu, the role-playing game.  I am a particular fan of the 6th edition and I actually use it as the standard for rating a game a "10".  Call of Cthulhu is a self-contained rules set.  The core book contains all the rules needed for play.  There is character creation, combat, magic, a bestiary, four adventures, and rules for running the game in three different time periods (1890's, 1920's, and the "modern" era or 1990's).  The system is fairly simple.  The horror setting of the game allows for character death and the sanity rules are one of the most influential mechanics of rpg history.  I love how skills advance when characters fail at using them. 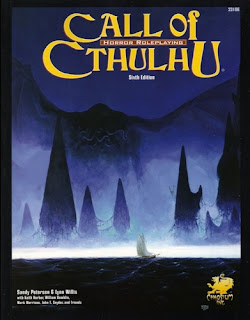 Call of Cthulhu is not a perfect.  There are skills that are rarely used.  Parts of the game are too dependent on chance.  The combat rules are a little loose.  However, in terms of value for page count I think it is the best rpg that I own.  There is a new edition out and I feel no need to own it, even though it sounds like they have made some good improvements on the system.  I will probably be the cranky grognard who will only run 6th edition until the end of days.