Witch and Witchcraft Reading Challenge: The Good, the Bad, and the Undead

The Good, the Bad, and the Undead:  My first review for the 2017 Witch and Witchcraft Reading Challenge. 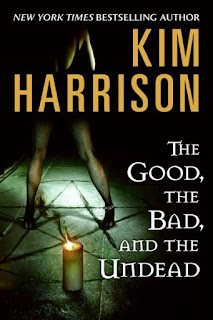 The Good, the Bad, and the Undead by Kim Harrison is the second book in her urban fantasy "The Hollows" series.  I reviewed the first book, Dead Witch Walking, back in 2015.  Dead Witch Walking set up the series as it ended with Rachel Morgan severing her official ties with law enforcement and becoming an independent runner.  The Good, the Bad, and the Undead starts with her working on her own.  Rachel is a witch who lives with her vampire roommate/business partner.  They run Vampiric Charms, a private investigation/bounty hunter firm located in Cincinnati.  In this book Rachel has to track down a killer who has been targeting ley line witches.

Harrison adds more depth and background to all of her characters in this book.  We learn more about Rachel's history as well as the world of the Hollows, where vampires, witches, werewolves, and other supernatural creatures exist alongside humans.  One of the strengths of this series is how Harrison explores the practical and legal matters that have arisen because of this arrangement.  For example, I like how demons are not held accountable for their actions in court, since when a pact is made with them that are compelled to complete it.  Thus they have a status similar to weapons.  Another thing I like about the book is the humor and levity.  The fun parts help to keep the story moving along quickly.  I enjoyed the book.  My favorite parts of these books is Harrison's world-building.  My only criticism is that the main mystery is solved but its solving felt anticlimactic.  I would recommend this to fans of urban fantasy.

This book and series is great inspiration for anyone running an urban fantasy campaign, particularly one in which supernatural creatures exist in the open.  Harrison provides some fresh takes on familiar creatures.  Vampires exist in living and dead versions.  The rules for dealing with demons  is explored more in this book.  These rules are perfect for any game that features demonic pacts.  If you need some fresh takes on urban fantasy, particularly with how legal and bureaucratic issues would intersect with the supernatural, the Hollows series is a great place to look.