What the heck?  There was a BattleTech cartoon?  I am going to have to go on an old man rant for a little bit.  When I was a kid we didn't have all of this fancy streaming and on-demand programing.  There was no simulcast anime.  You were stuck with broadcast tv and whatever cartoons happened to showing.  I remember watching an episode of Voltron on the Spanish station even though I don't speak Spanish.  It was the first time I had seen vehicle Voltron in years.  If I had known about the BattleTech cartoon when I was a kid I would have been all over it.  Mechwarrior was my favorite computer game.  I owned CityTech, even though I never played it.  Alas, this show was put out in 1994 and was off my viewing radar at the time.  Thank heavens we now have the internet.


I recently watched the first episode of the BattleTech animated series titled "The Gathering Storm."  I will try to keep this spoiler free.  The series involves the Clan Invasion storyline of the BattleTech mythos.  The series opens up with one of the clans invading the planet of Somerset.  Major Adam Steiner has a brother on that planet as it is his homeworld.  He needs to acquire a jumpship so that he can lead a lance of mechs to go liberate Somerset.  That is pretty much the setup of the show and the series. 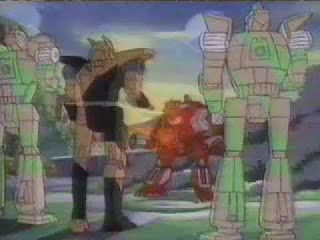 The animation is standard 80's style, similar to GI Joe in quality.  The series came out in 1994 so I would have thought that the animation would have been a little better.  When mechs are battling they switch over to computer animation.  Today it looks cheesy but in the 90's I'm sure it was impressive.  The first episode has plenty of mech battles, one of which is in space.  We see mechs use jump jets and learn the importance of tactics.  The only thing they don't reference is heat built-up, which is slightly disappointing since heat management is a critical part of playing BattleTech.

The politics of the Inner Sphere are nicely summarized and explained for the viewer.  I never really bothered with the backstory when I played Mechwarrior but I feel like the show gives the viewer enough to understand the universe.  I am pretty shocked that a BattleTech cartoon was ever made.  It will probably be the closest we get to a big screen Battletech adaptation.  If you are a BattleTech fan who hasn't seen it check out the first episode.  If you know how to use the internet you can find it, although the video quality won't be the best.  Here's hoping for more rpg cartoon adaptations.  I say the next one should be Shadowrun!
Posted by Ned at 8:35 AM