For today's Rolling Wednesday I present a bucket of six-sided dice. 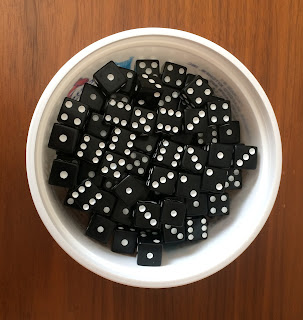 What can you do with a bucket of d6?  What can't you do!  You can use them to play Tunnels & Trolls or Shadowrun.  You can use them for wargames such as Warhammer 40k.  You can play some dice games like Yahtzee or Farkle.  You can build towers and buildings with them.  D6 are my favorite dice and I could have fun just grabbing a handful of them and feeling them run through my fingers.

So what have I done with this bucket of dice?  I used them in my psychology and geography classes. I ordered a block of 200 six-sided dice off Amazon specifically to teach my students to play Liar's Dice.  Liar's Dice, also know as Perudo, is a bluffing game that was featured in Pirates of the Caribbean: Dead Man's Chest and was a minigame in the video game Red Dead Redemption.

Using Liar's Dice in the class was enlightening.  I created a powerpoint which would explain the rules.  This was a good exercise in teaching rules to a large group.  I decided to simplify the rules by dropping the rules for wild dice and calling the exact count on the dice.  I had justifications for using the game for each subject.  In psychology the students would play the game and look for psychological signs of bluffing.  In geography the game would be introduced as a South American game and used as a cultural artifact for that unit.

The next step was to figure out how to get 33 students engaged in the activity.  I picked up some cheap plastic containers and plastic cups.  I also found a simple paper copy of the rules and made copies.  I made sure that each container had 25 dice, 5 cups, and a sheet of instructions.  I could put five students in a group, give them a container, and they were ready to go.  During the activity I would rotate and sit in with each group, playing a round to make sure that everyone understood how the game worked.

How did the activity go?  It was loud.  Students shaking dice in cups makes a lot of noise.  Most of the students did have fun, which was essential.  Educators are often told how important standards, grades, and test scores are that they often lose sight of whether students are happy.  If students can associate your class with having a good time then they are more likely to pay attention and learn.  I definitely encourage the use of games in the classroom to promote fun and learning.

Liar's dice is a great game and all you need are a bunch of six-sided dice and some cups.  Here are some links to the rules: