Today's question is about the largest in-game surprise I have experienced.  This took place in a Pathfinder campaign that I was running.  In the adventure a wealthy patron was trying to recover a magical artifact that he suspected the players of stealing.  He invited them to diner and drugged them all so that everyone fell into a deep sleep.  He then had his mage place all of the characters into a dream realm which the patron controlled. 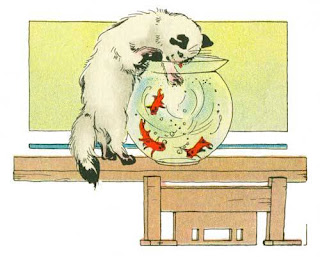 Part of the dream involved the players having to cross a room that was filled with a giant fishbowl.  The lip of the fishbowl was at the height of the doors, so the idea was that the players would open the door to the room and have to swim across the fishbowl.  I created a giant goldfish monster for the characters to fight and studied the rules for swimming and water combat.  Sure enough, one of the players cast spider climb.  They climbed across the ceiling, attached a rope to the other end of the room, and then the rest of the party used the rope to get across the room.  I was proud of their problem solving but disappointed that I did not get to have an underwater goldfish fight.
Posted by Ned at 6:30 AM