First D&D Novel that You Read

The first time that I read D&D fiction was when I picked up a copy of the Dragonlance Saga graphic novel from Waldenbooks.  I was book #1 and it had an awesome cover on the front showing the characters camping, and it had another awesome picture on the back of three of the characters facing off against a dragon that has Raistlin trapped under its claw.  I read that book over and over.  I loved the scene where Raistlin reads a scroll and the letters vanish off of the parchment.  I remember thinking, "So that is how that works."  I also liked that fact that Raislin was sick, I had never seen a main character with such a physical fault before.  I read the novel Dragons of Autumn Twilight years later, and I realized that the graphic novel adapted the first half of the book. 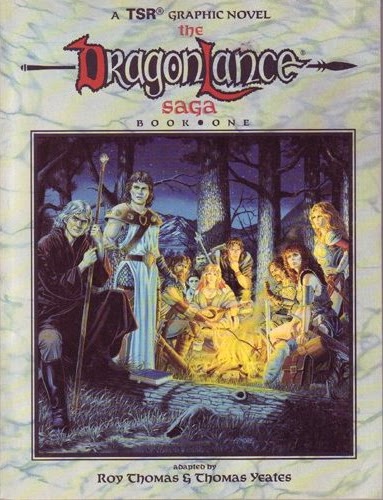