Game Review: Fantasy Wargaming; The Highest Level of All

Fantasy Wargaming is a role playing and wargaming set of rules.  The book says "compiled and editied by Bruce Galloway", as was a collabarative writing.  The blog Swords & Dorkery has a great post about the history and writing of the book.  This review is based on a read-through of the text. No attempts were made to play this game. 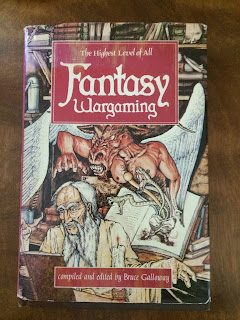 This book is an attempt to create a role playing game based on the historical Middle Ages.  Characters can interact in a European medieval world with Christianity and/or the Norse gods as the dominant religion.  The authors create rules for social standing, how magic would work in Christian/Nordic Europe, combat, and monstrous creatures.  The rules are convoluted and the book feels like someone took their masters thesis on the Middle Ages and turned it into a role playing system.  The modeling of the medieval Christian paradigm into a game system (complete with stats for God and saints as well as calculations for length spent in Purgatory) is impressive.  Overall, this would make an interesting resource for game designers or those interested in the Middle Ages but the system is too complex play.  I will provide a brief synopsis of each chapter

The introduction of the book introduces the concept of fantasy role playing.  The  intended audience of the book is miniature wargamers, and the author tries to convince them to give fantasy role playing a try.  The book shows its age when the author talks about how they first tried Dungeons and Dragons.  They state that they found "a fairly basic set of rules, called 'Tunnels and Trolls...'".  Tunnels and Trolls is a different game from D&D, although it began life as a D&D variant.  The authors are British and T&T was one of the first rpgs to be sold in the UK.  However, this shows how early in the hobby this book was written, as Dungeons and Dragons is at this point synonymous with fantasy role playing.

Chapter I, City, Court, and Country

This chapter describes life in the Middle Ages.  The authors write about where people live, what they did, etc.  Feudalism is described.  There is a lot of information about medieval Europe.  A GM or player will gain insight into the history of the Middle Ages.  The strength of this chapter is that the role-player will understand the medieval world better from reading it.

In my opinion this is one of the most interesting chapters.  The authors discuss magic and present their theory as to how they can model magic and the supernatural in Christian Europe during the Middle Ages.  Magical energy comes from belief.  The Ethereal Plane exists, and this is home to Heaven, Hell, Valhalla, fairies, and the like.  There is a discussion of the Church and of how magic and magic-users were viewed in the Middle Ages.  Pagan magic is examined, as well as the differences of magic in the Dark Ages and High Middle Ages.  Actual game mechanics are not present in this chapter.

Chapter III, The Book of Physiologus

This chapter talks about monsters and fabulous creatures of the Middle Ages.  There are no stats, this is pure description.  The authors discuss how monsters appear in the stories and literature of the time period.  I particularly liked the comparison of Teutonic vs. Celtic dragons.  There is also talk about Medieval bestiaries and creatures from heraldry.   The main point of this chapter is that if one is going to run an authentic Medieval game, then the source of creatures should be the actual Middle Ages. Barrow Wights are in, orcs are out.  Dwarfs (not dwarves) are in, except they kidnap mortal women.  If it is seen on a tapestry or shield, the players can kill it.

This chapter describes weapons, armor, and fighting techniques of the Middle Ages.  There are some pictures of weapons, castle plans, and a glossary.  This chapter is short and like chapter one the strength of it is in helping players and GMs understand the details and context of historical medieval combat.

This chapter contrasts strongly with the rest of the book.  From the introduction through the first four chapters the tone of the book has been one of, "Do you know what would be really cool?  D&D except if it took place in the real Middle Ages!"  The descriptions in the book strive for historical accuracy, even when discussing myth and magic of the time period.  In the section on character creation female characters are forced to take penalties to their stats and are forbidden from all combat.  Chapter V discusses fantasy literature to read and use for inspiration.  Tolkien is mentioned, as are a few series about King Arthur by T.H. White and Mary Stewart.  More than one series is mentioned that are about future civilizations and seem to cross the border into science fiction.  Anne McCaffrey's Pern series is mentioned.  The contrast is that many of the books talked about are either high fantasy or science fiction.  They take place on worlds vastly different than our own, or are fantasy tales full of strange creatures and stranger magic.  The choices seem odd for a book that spends so much time trying to ground its rules in the Middle Ages of our world.  However, we gain a glimpse into the author's taste for fantasy literature back in 1981.

This chapter is full of advice for the game master.  The new GM is told to use fiction and the real world as templates for the game world.  The authors reiterate that the default setting of Fantasy Wargaming is Medieval Europe, and therefore the GM does not have to create a new world.  Of course, the GM can create their own world if they want.  There are some interesting pieces of advice, such as letting a player don the role of an npc.  The idea of traps is deconstructed, as traps lying dormant in dungeons would likely be victims of rust and rot and may not work properly.  Most of the advice is useful and relevant today.

Here is the meat of the game.  There are rules for character creation, doing stuff (picking locks, etc), combat, magic, gods, and monsters.  The rules for Fantasy Wargaming are byzantine and complicated.  There is a detailed chart for the character's social class, where the character can be anything from slave to emperor.  There are optional rules for rolling your character's astrological influence and how it changes their states.  Female characters are banned from all combat.  Characters can have the disadvantage of being a heretic or being Jewish (since it is the Middle Ages).  That is just character creation.  The rules of play have many idiosyncrasies.  Here is an example of how to calculate a character's leadership score. 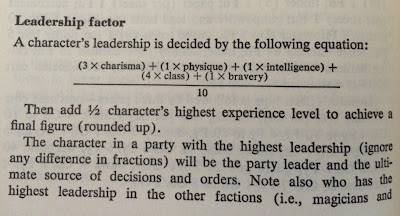 Figuring out your character's combat maneuver bonus in Pathfinder is child's play in comparison.  Speaking of leadership, the party of characters has a leader who tells everyone what to do.  There are in game rules for challenging the leader.  There are also rules for temptation, which fall in line with the medieval view of sin and temptation.

The rules for doing things in game involve rolling on a chart with percentile dice.  One interesting note is that the charts have results for partial success as well as success.  I thought that the idea of a partial success or success with complications was a modern game design concept, and here it is in a game book from 1981.  Combat is also resolved by rolling on a chart, and there is a chart for weapons breakage.  When consulting the charts there are many modifiers that are added and subtracted in order to find the difficulty of the roll.  The book prints these modifiers as a sentence rather than a vertical list, so I found it confusing to read through them.

There are also a set of miniatures wargame rules for large scale battles.  Of all of the rules in the book, these ones seemed the most playable.  After those there are the rules on magic.  The author(s) do give a list of spells and they also give a system for creating spells and rituals.  Again, these rules are very complex and when reading them you sense that the authors knew and discussed a lot about actual medieval magical practices.  There are rules for divine magic, including how much mana a human sacrifice will get you.  You can also calculate how long a soul will stay in Purgatory.  The rules are detailed and are impressive in that the author(s) show their knowledge of the subject.  If someone mapped out how medieval people thought religion would produce spells, blessings, curses, and miracles, this system models it well.  There are stats for God, saints, demons, and Norse gods.

The chapter ends with a bestiary.  All monsters are from the Middle Ages, i.e. people actually believed in them, they were from actual myth, or there was a picture of one in a book or on a tapestry.  Therefore, dwarfs lust after mortal women and players can fight venomous sheep.  Stats are given for each creature.  If I use any part of this book for a campaign, it will probably be this section.

This book feels like it was written by a hobbyist, however the author's voice changes from chapter to chapter as the book was a collaboration.  The best features of the book are how it turns the medieval worldview into a game system.  If you want to know how well God would respond to a cleric's plea according to how pious he was, then this game can simulate that for you.  This also means the game disenfranchises female characters and forces the players to deal with issues of antisemitism.

So who is this book for today?  Should a group try and run it (answer - no)?  Is it worth it as a reference?  Here is my opinion.  If you want to run a game based in the real Middle Ages, there are better designed games out there that will do that, such as Pendragon or Ars Magica.  I think that this book would be of most interest to the collector, game historian, and designer.  The collector and game historian can look at this book as an early attempt by amateurs to create their own realistic version of D&D.  The designer can mine the book for some interesting ideas and admire the authors passion while avoiding the confusion wrought by the game.  If you are interesting in obtaining your own copy do a quick internet search.  I grabbed a used copy off of Amazon.