There are various dice rollers on the internet.  Today I wanted to share one of my favorites, random.org.  This site is actually a site for generating random numbers.  They explain how most computer programs use pseudo-random methods to create random numbers.  Random.org uses "atmospheric noise" to produce truly random results.  There are some great articles explaining how the site works and how it achieves randomness.  My favorite is the article that shows two bitmaps side by side; one generated by random.org and one by the Microsoft Windows random number generator.

There are two ways that you can use random.org as a dice roller.  They have a dedicated die-roller page, where you can roll up to 60 six-sided dice at a time.


Random.org has other great uses.  You can use it to randomize lists, shuffle a deck of cards, pick lotto numbers, and even white noise.  I use it in education to randomize lists of students and answer choices.  They have an app that you can download.  The app has a coin flipper that allows you to pick different coin images.  You know nerds made it because one of the coins that you can use is Two-Face's double-headed coin.  The app gives you the coin flipper for free and for a small fee you can unlock the other features.

Random.org is a cool website and it is worth a visit to see what it can do.  I recommend it.

Today's dice is a set of stone six-siders that I picked up at the Natural History Museum in Houston.  They are nice and hefty.  I don't dare roll them because I am afraid that I will either break the dice or the table.  They look cool and make great props, though. 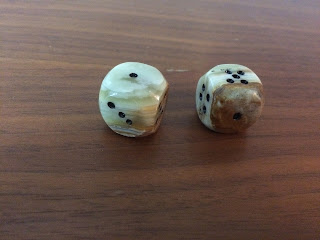 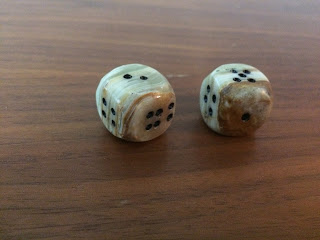 This is a round die.  It belonged to a pair but I lost the other one long ago.  The die has a weight inside of it.  You roll the die and the weight eventually brings it to a stop.  I loved my round dice when I was a kid.  I thought they were really neat.  The problem with them is that the results are not always clear.  Sometimes they will stop "in between" numbers,  Anyway, it is a cool die to have in the collection. 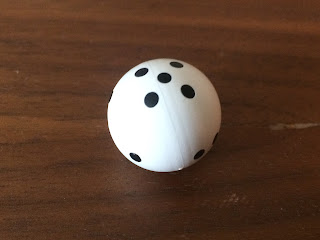 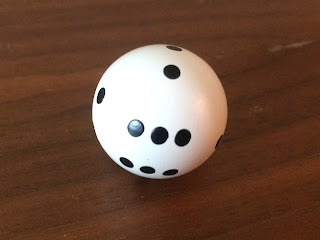 I have been very busy.  Real life events are drastically cutting into gaming time.  I would love to have 3-4 hour chunks of time to dedication to a board game or an rpg session.  Instead, I am getting 15 minute chunks of time sandwiched between frantic activity and exhaustion.  I began some play-by-mail games in order to get my gaming fix while real life devours my time and energy.  They work well because in my 15 minute chunks of free time I can prepare my turns, send them off, and then all I have to do is wait for my turn results to arrive.  I am currently playing two games and I signed up for a third.

Duel2 is a game of gladiator combat run by Reality Simulations.  In the game you have a stable of five gladiators in a fantasy world.  There are elves, orcs, and other fantasy races but magic and spells do not factor into the gameplay.  Each turn you pick one to five of your gladiators that you wish to fight.  You arm them and pick their fighting strategy.  You can also challenge warriors and avoid challenges, which adds some strategy to the game.  Each turn you receive a print-out describing the fights.

I like the game.  It is simple and fun.  I have graduated from the newbie arena and am currently fighting in Aruak City.  I plan to write up a review of this game soon.  If you are new to play-by-mail Duel2 is a a great game to start with.

Hyborian War is a war game that is also run by Reality Simulations.  As the name suggests it takes place during the Hyborian Age created by Robert E. Howard.  Each player controls a kingdom, and you have the choice of playing a large, medium, or small kingdom.  I am currently ruling Punt, a small kingdom.  This game is a grand simulation.  You engage in diplomacy, spying, and warfare.  When battles occur you decide how to line up your troops, what strategy to use, and what spells to cast.

The big draw for this game is that it takes place in the world of Conan.  According to the rules Conan wanders around the map and can show up in your kingdom.  The game is a good low-fantasy wargame.  I have the found the rules to be a tad confusing but I am having fun with the game.  If you sign up to play I recommend the site warbarron.com.  It has forums for people playing Hyborian War and is full of advice and strategy tips.  You will need to register for an account to view anything.

Starweb is a science fiction exploration/wargame run by Flying Buffalo.  I have read the rules and signed up for a game.  That brings me to one of the downsides of play-by-mail, waiting for games to start.  It can take months for companies to have enough players sign up before they can start a game.  I encourage anyone reading this to try a play-by-mail game if only for the reason that we can get some games started faster!

Starweb is a game in which space travel takes place through a series of warp gates.  You spend your time exploring gates, taking over planets, and battling and trading with other players.  There are different roles, for example you can play a race of killer robots or a group of religious fanatics a la Dune.  There is an interesting game mechanic where each player bids a certain number of points at the beginning of the game.  Those numbers are averaged and then the game's stopping point is set from that average.  When the game starts I will post more about my experience with it.

I have been happy with my play-by-mail experiences.  If you want to learn more about the state of play-by-mail gaming check out the following resources:

This is another shout out for a dice Kickstarter.  Rick Loomis of Flying Buffalo (the company that publishes Tunnels and Trolls) is doing a Kickstarter to make more of his pizza dice.  Pizza dice are a product that Flying Buffalo sells.  The idea is that you roll the dice and they tell you what pizza toppings to get.  The faces of the old pizza dice were printed.  The esteemed Mr. Loomis is trying to raise money for a mold, so that the new pizza dice will be engraved.


You don't just get two pizza dice with this Kickstarter.  For ten dollars you get ten dice.  Two pizza dice, five adventure dice (for generating things like traps and treasure), a nuclear die, a monster reaction dice, and a fast food die.

My description does not do this project justice so please check out the Pizza Dice Kickstarter.

I will end by saying that I have been ordering products from Rick over at Flying Buffalo for ten years.  He has some of the best gaming products for the best value around.  His customer service is excellent.  Plus, he sells one of my favorite rpgs (Tunnels and Trolls!).
Posted by Ned at 6:26 AM

Federation Commander: First Missions is a 34 page PDF that contains all of the rules, maps, and counters that you will need to play the game.  The rules include a Federation and Klingon ship and two scenarios.  The rules are a stripped-down version of the Federation Commander rules, as rules for drones and seeking weapons (missiles) are removed and some of the more complex movement rules are missing.  However, this does not diminish from the rich tactical experience that the game provides.

The game simulates space combat between a Klingon and Federation warship.  During the game you use energy to power your ship's movement and weapons.  The game reminds me of Car Wars in that you pick your speed and then that speed determines on which part of the turn you move.  The game is very tactical as maneuvering your ship correctly can mean life or death.  Weapons have certain firing arcs so you want to be in the right position to send your photon torpedoes down your enemy's throat.

Energy is the currency of the game.  Your ship produces energy from its warp engines.  Energy is used for movement, firing weapons, and reinforcing shields.  This will put you in situations where you will have to make tough choices, such as do you save energy for firing your weapons or do you use it to repair that damaged shield?  Also, if your engines take damage then you will produce less energy.

This game makes me feel like I am a true spaceship captain.  I have to manage my ship while trying to outfox my opponent.  The PDF comes with two scenarios.  One is a ship vs. ship duel, which is what we played.  The other is a convoy scenario.  The PDF is easy to read and contains counters and a hex map that you will need to print out in order to play the game.  My only complaint is that the PDF has a decorative border running down the side of each page.  The border is a black strip with stars on it.  It may look nice but it eats up ink when printing, so I went to Kinko's to print out my copy.

If you are into Star Trek or space combat then I would check this game out.  Also, if you think Star Fleet Battles seems too complex then try out Federation Commander first.