Appendix F of the first edition AD&D Dungeon Masters Guide has rules and descriptions for gambling games that can be used in a campaign.  Gygax included two ways to model a slot machine using standard six-sided dice.  I was able to take this concept and improve on it.  I have a set of dice with slot machine symbols on them. 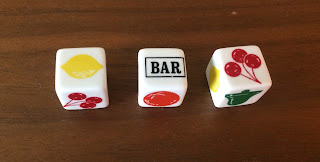 I pulled these dice out during a Hackmaster campaign.  The characters were in a city that had a large gnome population.  The gnomes were specialists at making all sorts of magical and mechanical devices.  The tavern that the characters were in had a slot machine.  I passed over the dice and let the players wager their gold. 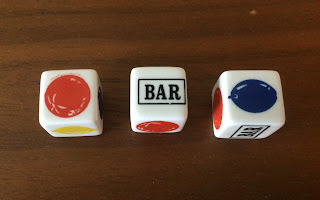 The dice themselves are white plastic six-sided dice.  The symbols are printed on the sides.  I acquired them in a set that contained 5 different dice games (poker dice, put and take, bowling dice, slot machine dice, and standard six -sided dice).  The slot dice were a nice little prop to add some flavor to a standard tavern scene.
Posted by Ned at 12:53 PM

Here is a random four-sided die from my collection.  This one is white with red numbers.  I find the d4 to be the most mystical die, due to its pyramid shape. 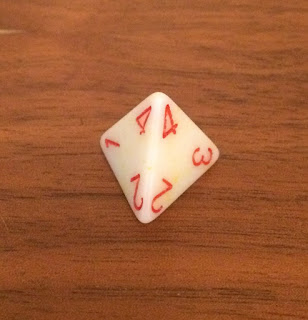 Cool Resources on the Internet: The Tower of the Elephant

Many tabletop gamers are also fans of Robert E. Howard’s Conan the Cimmerian.  The Conan stories are listed in the venerable Appendix N in the AD&D Dungeon Master’s Guide.  Howard published numerous Conan stories, and writers such as L. Sprague de Camp, Lin Carter, and others have added to the cannon.  Marvel comics produced a great run of Conan comics and the excellent black and white magazine The Savage Sword of Conan.  Dark Horse Comics has reprinted many of these and continues to produce new Conan comics.


Today I want to talk about the Conan tale “The Tower of the Elephant”.  This is a classic D&D adventure story, as it involves Conan breaking into a wizard’s tower to steal treasure.  I think that this is one of the reasons tabletop gamers find Conan to be such an alluring character.  Conan behaves more like a D&D character than many other fantasy heroes.  He steals, he is always fighting, and he generally looks out for himself.  I am writing about this story because there are some cool free internet resources available for gamers that relate to "The Tower of the Elephant".

I. The Story
According to Wikisource, “The Tower of the Elephant” is in the public domain.  I highly encourage you to support authorized editions of Howard’s work such as The Coming of Conan the Cimmerian.  However, you can click on the following link and read the story for free:

Tower of the Elephant

II.  The D&D Adventure
Mongoose Publishing put out an adventure for their D20 Conan rpg called Conan and the Tower of the White Elephant.  That module is currently out of print.  However, the excellent D&D fanzine Footprints has an issue in which someone wrote an adventure based on the story.  The issue is free and it is stated out for Basic D&D, AD&D, and most retro-clones.  Make sure to check out other issues of Footprints, as they are full of awesome material for your fantasy role-playing games.  Here is the link:

III.  The Text Adventure Game
Any gamer who is old enough to remember descending armor class should be familiar with text adventure computer games.  These were games where you read a paragraph and then typed in your instructions using certain commands.  Zork is one of the earliest and most famous, although I had fun playing the Hitchhikers Guide to the Galaxy game when I was young.  Someone has created a free text adventure game based on “The Tower of the White Elephant”.  The link is below:

The Tower of the White Elephant Text Adventure Game

IV:  Cromcast Podcast
I would be remiss if I did not mention the Cromcast podcast.  The Cromcast is a show dedicated to the fiction of Robert E. Howard and has many shows about Conan.  Their main page can be found at thecromcast.blogspot.com. Episode number 3 is about “The Tower of the Elephant”.  This show is where I found out about the text adventure game. You can listen to it by clicking on the following link:

Email ThisBlogThis!Share to TwitterShare to FacebookShare to Pinterest
Labels: Conan

Today I will be showing the RPG Character Dice that I recently ordered from Jade Gaming News.  These dice are sold in two sets, one for 3rd edition D&D and Pathfinder and one set for 5th edition D&D.  The sets include two six-siders with alignments, an eight-sided die with races, and a twelve-sided die with classes.  I ordered the factory reject 3rd edition set and a jumbo race die.


The factory reject dice were cheaper than the regular set and I am very happy with them.  I haven't examined them closely but I don't really see any obvious blemishes or defects.

These dice are cool and I don't think that I will ever get tired from rolling up random character options.

The race die is hefty and has nice graphics.  It is 24mm and well made.

You can order your own sets at the Jade Gaming Shop.  Prices are in Canadian dollars.
Posted by Ned at 6:26 AM

Today we have a Gamescience twelve-sided die that I rescued out of the bulk dice bin at my FLGS.


The die is a nice clear orange.  I really like the way that it looks.  It is not inked, but I don't think that I will ever want to ink it.  The die has a jewel-like appearance that would be marred by the inking process.


If you don't own any Gamescience dice I would definitely pick some up.  Head on over to their website and browse.

They have tons of other stuff, including TWERPS, a role-playing game that only has one stat.  Check them out.
Posted by Ned at 7:32 PM

I recently took a graduate class on the Age of Napoleon.  Napoleon is a figure that I have heard much about but knew very little.  One of the main books for the class was Napoleon: a Life by Andrew Roberts.  This is a thorough biography of Napoleon that I would recommend to those who are serious about the topic.  It is a hefty, 926 page book that is full of detail.  One of the interesting facts that I learned is that when Napoleon conquered Italy he took vast amounts of paintings, manuscripts, sculptures, and other art pieces back to France.  This continued throughout his campaigns.  One of the most famous and culturally significant items taken was the Rosetta Stone from Egypt.  This gave me the idea that if you are running a dungeon looting campaign, have the party be sanctioned by a conquering force to go and “acquire” artifacts of value.


Here is the campaign idea.  The group is attached to an invading force.  Perhaps it is an army liberating the land from the Lich Lord’s undead hordes.  Maybe the army is just conquering a neighboring province for the king that the PCs owe allegiance.  The characters are sent on missions by the leader of the invading force to find certain artifacts.  They have to explore the Dungeon of Despair, avoid traps, kill monsters,  and locate the mythical Sword of Soul Rending.  If you need some more role-playing and intrigue, then send characters to a recently liberated town.  They need to question the locals and find the Tome of Eldritch Power.  They will have to search for clues while dealing with tensions between collaborators, hidden rebels, and local townspeople just trying to survive.


The main thing that you can get from this plot is a legitimate reason as to why the characters are running around and stealing treasure.  Instead of being random murderhobos, the characters have some real authority behind their actions.  They have a group in power sanctioning them and they have to deal with the consequences of that position.  They can appeal to their leader for help and supplies.  They also have to deal with mobs of angry peasants who just had their fields burned down and who don’t give a damn about the King’s Order of Writ that the characters have.  This idea could easily be applied to other genres such as science fiction and steampunk.  Good luck and happy looting!
Posted by Ned at 12:40 PM

Today we have a six-sided die with a skunk on it.  That is all. 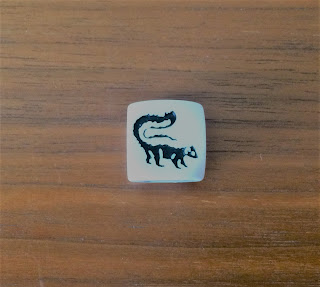 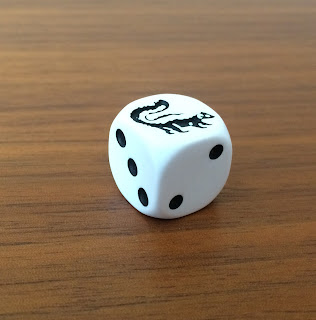