Special thanks to the fine folks at Seven Sphere Publishing for providing a free print copy of this module for review purposes.

This review has been a long time coming.  Work has overwhelmed me this year, leaving little time or energy for gaming.  However, I have been reading about the Open Legend RPG system and their introductory module A Star Once Fallen.  The Open Legend RPG system has one of my favorite characteristics; the rules are freely available online.  I still have not played the system, or any rpg system, since work has started but I have read through this module and I will share my impressions.

The Open Legend RPG system is an open source system that uses a central mechanic of rolling a d20 plus another die to determine results.  The publishers have released a module that teaches the game system while taking the players through a fantasy scenario.  The module is titled A Star Once Fallen and it is available on a pay-what-you-want basis from Drivethrurpg.com.  This product is a combination of game rules and module.  I'll talk about the mechanics first and the module second. 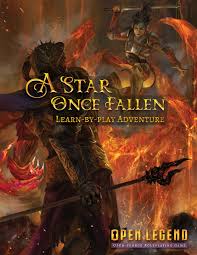 A level in an attribute gives you a die, with 1 equalling a d4, 2 equalling a d6, and so on.  Actions in the game are made by rolling against a target number, such as a character's defense or an opposed roll.  To make a roll you grab a d20 and add any dice that a relevant attribute would grant you.  For example, if you have a 2 in Deception and you are trying to bluff your way past a guard, you would roll a d20 and a d6 and add them together.  All dice explode, so if you ever get the maximum on a roll you roll that die again and add it.  This mechanic seems like it would make for some wild action scenes.  I wonder if this system would be a good fit for a Wuxia style campaign.

One rule that I particularly liked is that every roll matters.  Failed rolls can lead to the characters succeeding with a twist, or failing but the story progresses.  This makes sure that the game moves along.  Combat is fairly straightforward and if you have played most fantasy rgps you will understand the mechanics.  Again, it centers around the roll a d20 plus your attribute dice rule.  The new wrinkle that combat throws in is banes and boons.  These are special conditions that you can try to place on characters.  To successfully use a bane or boon you must have the minimum attribute level required to use it.  For example, to use the Bane "Forced Move" you have to have a 2 in either might, movement, or energy.  This allows you to explain your use of forced movement as either your super strong character throwing someone around, your swashbuckler outmaneuvering them, or your psychic character using telekinesis to push someone back.

The module's story is presented in a sort-of linear sandbox style.  The characters are shipwrecked on an island and are given a starting point.  After that there is a series of encounters and events that the PCs can engage in at their leisure.  The characters are stuck on the island and have to deal with the Mcguffin in order to get off.  I don't want to spoil anything, but I will share that the island has warring factions, evil monsters, and locations where the characters can get into trouble.

One thing that the module does that I liked is that it introduces the rules progressively throughout the adventure.  The first encounter explains how combat and basic rolls work.  As the characters explore the island new rules are added depending on the encounter.  The idea of presenting them in steps as they relate to encounters is a good one and I think more games would benefit from it.

Open Legend bills itself as a multi-genre system while this module focuses on fantasy.  With a little bit of work I could see this module run as a pulp adventure as it has tropes such as jungle adventures, lost cities, and high action.  The story works well and you could use this adventure with another system easily.  The only things that I wanted that were missing were a character sheet and some more maps for the individual encounters.  However, a character sheet is available on drivethrurpg and there is a nice map of the island.

Open Legend is currently running a Kickstarter.  They have some impressive names attached to the project, including Ed Greenwood.  If you are curious as to how the system works A Star Once Fallen is a great way to introduce yourself to the game.  I am looking forward to seeing what Seven Sphere Publishing does with this system in the future.

Check out A Star Once Fallen at drivethrurpg.