Under a Black Sun is a PDF produced by Fantasy Flight Games.  It includes quick-start rules for the Edge of the Empire (EotE) rpg, four pre-generated characters, and an adventure.  The PDF is currently available on the FFG website in hi-res and lo-res formats.  There are also separate PDF files for each of the pre-generated characters from the module, plus two additional characters who are not in the module but are designed for it. 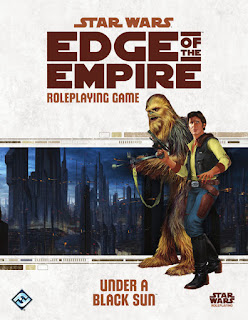 The artwork for Under a Black Sun is amazing and evocative of Star Wars.  The cover features Han Solo and Chewbacca standing against a background picture of Curoscant.  All of the images appear to be pictures that have been re-purposed from the Edge of the Empire core book.  The pictures are full color illustrations of characters and scenes from the Star Wars universe.

It is time for a little aside on the Edge of the Empire dice system.  I own a few sets of EotE dice so I had plenty to use for our game.  The dice have symbols on them.  Some symbols represent a positive result and some represent a negative result.  In the game you are rolling a bunch of dice and comparing how many symbols you get.  You create a dice pool out of positive dice that represent your skill and aptitude and negative dice representing the difficulty of the task and hazardous conditions.  After you roll positive and negative symbols cancel each other out and if your roll is net positive you succeed.


The system takes a while to learn and I am not completely sold on it yet.  I can not imagine playing Edge of the Empire with a standard set of polyhedrals and translating them via the chart.  It would feel like using the Rosetta Stone to play an rpg.  However, I applaud FFG for including the dice conversion chart so that the average gamer can try out the system before they sink money into specialized dice.  My recommendation would be to fork over $5 and buy the dice app.  The app will calculate the results of your dice roll for you.  The app also rolls standard polyhedral dice as well as dice for all of FFG's Star Wars games such as X-Wing, Armada, and Imperial Assault.  A set of Star Wars dice costs $14.95 and are only good for FFG's line of Star Wars rpgs, while the $5 dice app will at least let you roll dice for your D&D game.

Back to the book.  After explaing the dice and materials you will  need the module then launches into the rules.  We get an explanation of how the dice work,  Besides the success/failure mechanic, the dice also have advantage and threat symbols.  These symbols do not affect the success of your roll, but if you have more advantage symbols something positive will happen and if you have more threat symbols then something negative will happen.  Advantage symbols can also be spent by the players for in game effects such as critical hits and bonuses.  The GM can spend threats to hinder the players by giving enemies bonuses or making the characters' actions more difficult.  There are a few more cases but that is the basic mechanic of the game.

The rules then describe characters and skills.  Characters have six characteristics and a set of skills.  Each skill is linked to a characteristic.  When a character wants to do something they use their skill and characteristic to build a dice pool.  The module then describes combat.  Combat uses initiative, free actions, maneuvers (move actions in d20 speak), and actions (standard actions in d20 speak).  Range is figured in abstract range bands (i.e. short, medium, long, etc.).  There is a critical hit table and a description of different types of enemies (minions, rivals, and adversaries).  The rules mechanic that I like the most is obligation.  Characters in EotE are supposed to be scoundrels, rogues, and shadowy figures.  Each one has an obligation stat which represents how in debt, whether financially or socially, they are to a person, group, or personal code.  In the module each character can add upgrades to their character at a cost of increasing their obligation score.  The higher a character's obligation score, the higher the chance that their obligation will come into play during the adventure.

The module has a one page description of Coruscant, followed by the adventure.  The plot involves the characters being hired to track down a bounty hunter.  I won't go too in depth into the actual adventure to avoid spoilers.  What I will do is cover some highlights and things that I liked about the adventure.  It starts the players off right in the middle of an action scene.  The adventure has an opening, middle, and climax.  The GM has various options to add during the adventure.  The adventure is not linear and the characters have a good degree of freedom as to how to pursue their goal.  The GM is given multiple optional encounters to include.   There are specific examples for the GM as to how to have the characters' obligation come into play at certain points.  There is a good mix of combat, social, and skill based encounters.  This adventure is a great way to try out the EotE system for free.  At the least this adventure could be reworked by a GM and used with another system.  At face value it gives players and GMs an opportunity to see the EotE system in action and play through an authentic Star Wars adventure.

Pros: With the inclusion of the dice conversion chart this module is truly a free way to try out the EotE system.  The adventure is well written and the production values and art are phenomenal.  The quick-start includes all the rules you need minus character creation and advancement.  The module oozes Star Wars flavor and the modular nature is a plus.  A hard working GM could possible squeeze one or two more sessions out of this adventure.

Cons:  The dice system used in the game has a learning curve.  I felt like it slowed the game down.  I also felt like it didn't live up to its full potential.  My players never rolled enough advantages to score a critical hit with their weapons, and the advantage/threat mechanic felt like a burden.  The characters provided in the adventure are a good mix, but it is vital that the splicer (hacker) character be included among the party.

Final Thoughts:  This is a great free product from FFG.  It is a near complete taste of the EoftE rules.  Despite our mixed reaction to the system my group had fun with the adventure.  If you are curious about FFGs new line of Star Wars rpgs then this is definitely worth downloading.  FFG also sells a beginner box for EotE for $29.99.  While that set includes a set of dice, it is still more of an investment that downloading Under a Black Sun.  If our are a Star Wars fan or even a sci-fi gamer then there is something here for you.

You can download Under a Black Sun and character sheets here.
Posted by Ned at 9:35 AM